At 6:30 PM on Monday, April 27, 2020 the stakeholders for the Alameda Council, the Mt. Diablo Silverado Council and the San Francisco Bay Area Council overwhelmingly approved to merge the three Scout councils into a single new entity called the Golden Gate Area Council.  The official merger date of the new council was Monday, June 1, 2020 and the first leaders of the council were Scout Executive John Fenoglio and Council President Dan Walters.

Originally the vote of the stakeholders was scheduled for March 30, however due to the Coronavirus pandemic, the in-person meetings were canceled and ballots ultimately mailed to each of the voting members with the new date.

The discussions to merge the councils actually started back in 2012 when the leaders of the Mt Diablo Silverado council approached the San Francisco Bay Area council about a possible merge.  Those initial discussions ultimately ended on August 29, 2012 with a no merge vote.  However eight years later, those discussions again were the topic of the day due to the vacancies left by the Scout Exec positions in the SFBAC and MDSC Councils.  National guidelines require that Councils review possible merging when Scout Executive positions are vacated as a way to possibly save money.  This time, the merge made sense.

The merging of these three great councils into one, united over 19,000 youth members in Cub Scouts, ScoutsBSA, Venturers and Sea Scouts from six Bay Area counties into one strong council with over 7000 dedicated adult volunteers along with five Scout Camps.  The camps of the Golden Gate Area Council are comprised of Camp Royaneh (est. 1925), Camp Wolfeboro (est. 1928), Camp Herms (est. 1930), Rancho Los Mochos (est. 1944) and Wente Scout Reservation (est. 1959).

The three service centers of the council continued to be operated with one in Alameda (1714 Everett St), one in San Leandro (1001 Davis St) and one in Pleasant Hill (800 Ellinwood Way).  The Pleasant Hill office became the new headquarters of the combined council.

The first council shoulder patch (CSP) for the GGAC was designed by Venturer Melody Fewx which was selected from more than 70 entries by the various youth of the council.

The diagram below gives a basic pictorial overview as to the merger history, name changes and council identifiers for each of the original legacy councils along with the Order of the Arrow Lodges associated with the councils.

Over the years these various councils merged to form larger councils in order to broaden the reach of Scouting and provide more program for the youth in both the cities and suburbs. 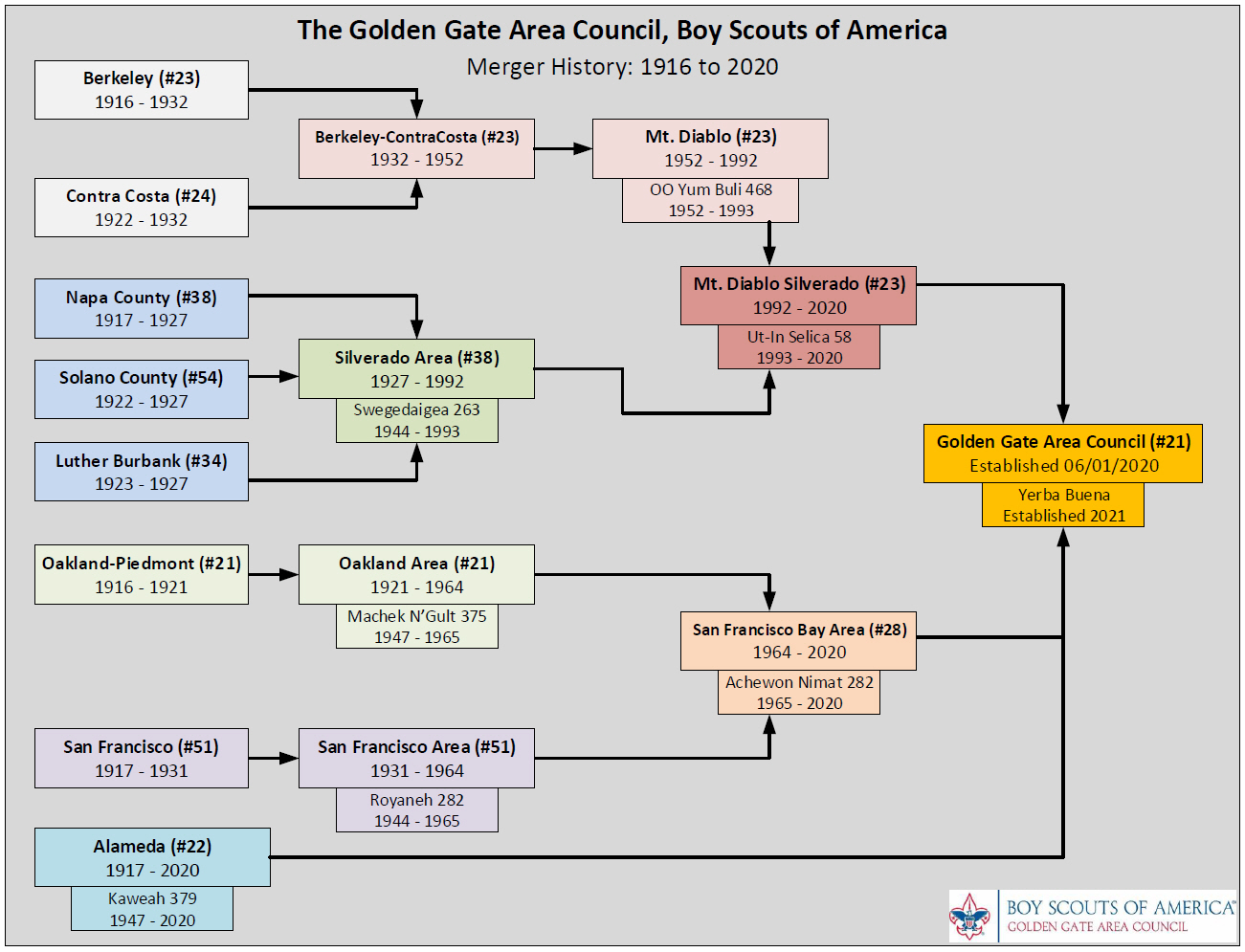